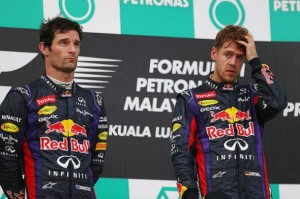 I make no bones of the fact I’m a bit of a petrol head. Have been since I was a nipper. And the F1 circus is, on occasion, a guilty pleasure.

Truth be told there were years that it bored me senseless. A procession of cars from start to finish, with zero excitement in between. Not so much these days. Today’s TV coverage now gets so close to the action it really does give you inside skinny on some of the politics, game play and posturing that goes on. Love it, love it, love it.

Anyway, it’s with interest I’ve watched the reaction to what took place in Malaysia last Sunday play out in the media this week.

For those not au fait with the on track shenanigans: Sebastian Vettel was running second to team-mate Mark Webber with 10 laps remaining when Red Bull’s team principal, Christian Horner, instructed both men to hold their positions. Vettel ignored the command and went on to win for the 27th time. Webber was not a happy man. See above picture if proof is required of the level of unhappiness.

The media has made much of this, wildly throwing around opinions, views and insight from all manner of F1 orientated aficionados and pundits. If you are to believe everything the critics say then as a result of what has been labelled by some as ‘maverick behaviour’ it would appear that one ego is hanging by a thread, whilst the other is being publicly maligned.

This *incident* has also raised many questions; Should team orders have been given? Should Vettel have ignored the order? Should Webber now leave the Red Bull Team? I have a question too. It’s a simple one: If you are Mark Webber how do you come back from something this? Can the relationship between Vettel and Webber actually be rescued or has this pushed it a long way past its sell by date?

This means orders get given, and they are given for a sound reason. What is of key importance here is the level of trust and respect between the team members. A driver who disregards team orders is  castigated because he is, in effect, betraying the team and creating mistrust within the organisation.

Since Sunday Vettel has publicly apologised for his behaviour. Additionally, Horner has gone on record saying that Vettel’s tactic was not acceptable and that the team just need to put it behind them and move on.

Maybe. Maybe not. Think about it logically – put your Mark Webber hat on for a second – even he and Vettel sit down and discuss what happened it is not going to change the outcome. It is still in their minds what has happened. It does not simply go away.

An obvious counter to that view would be that they both participate in a sport that is by its very nature competitive. They are not bosom buddies. They are not friends. They are racing drivers. So surely it is naïve to expect competitive spirit to conform to a direct order?

At the end of the day there are a lot of views and opinions that are being tossed about. None are right, and none are wrong. They are opinions, and are valid to the individual proffering them after all.

Whatever happens I think it will be interesting to watch how this plays out. I truly hope that whichever way it goes that Webber acts with integrity. And that maybe, just maybe, he acts on some words from Oscar Wilde: “Always forgive your enemies – nothing annoys them so much.”