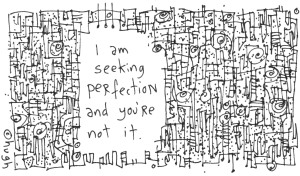 I noticed something at the weekend that made me think. Pedestals – what’s all that about?

When I meet someone new that knocks my socks off (not literally – natch) I sometimes fall into the trap of seeing that person in a very ethereal light. Their good qualities (looks, brains, humour, attitude, personality or whatever…) dominate my perception, and for some reason they just don’t have any negative qualities.  Which is just plain daft.  Much as it pains me to admit it – no one is perfect. No, not even me. We are all perfectly imperfect.

I know that I’m no different to anyone else – we are all guilty of putting others on a pedestal.  It’s when we actually believe our own projection of this person’s perceived perfection (try saying that quickly…) that troubles arise.

Everyone – hold on I’ll say it again for the record – EVERYONE – has their issues, flaws, hang ups and foibles.  However when we prolong the *perfect* illusion we don’t actually allow the person in question any room to be human.  Therefore when they do something that contradicts our idea of perfection – be it the way in which they behave or in something that they say – we become disillusioned.

In response to becoming disillusioned we may distance ourselves from them, in some instances we might even get angry or not want to talk to them, when what we should actually be doing is facing up to the fact that they are not to blame for us idolising them. Granted, they may have enjoyed seeing themselves as perfect through our eyes, but we are the ones who chose to believe in the illusion.

The simple thing to remember is we can’t truly connect with a person if we idolise them. By idolising someone we’ve subconsciously placed them above us. While you may respect them or think them worthy of such esteem, you are in actual fact setting your relationship with them up for failure.

Pedestals give you a very distorted view; you only see the aspects, attributes and abilities of the person that you want to see. Remember – we ALL shine at something. It’s just about working out what that something is…

3 thoughts on “Just an illusion…”